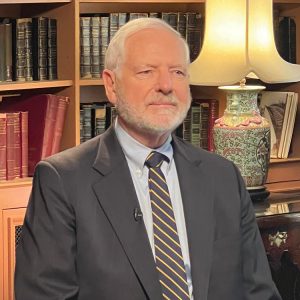 Geoff Shepard holds degrees from Whittier College and Harvard Law School. He was selected a White House Fellow in 1969 and assigned to the Treasury Department, where he worked under Paul Volcker, then undersecretary for monetary affairs.

Following his fellowship year, Geoff joined John Ehrlichman’s Domestic Council staff at the Nixon White House, where he served for five years, first as a staff assistant and ultimately as associate director.  His primary public policy focus was on “law and order” issues, so he worked closely with senior officials at the Department of Justice.  As a result he knows and had worked with virtually all of the major Watergate figures – except Howard Hunt, James McCord and the Cubans.

For the past four decades, Geoff has arranged and hosted annual reunions of the Nixon/Ford policy planning staffs, consisting of former members of the Domestic Council, the National Security Council, the Office of Management and Budget and the White House officials with whom they worked.

Beginning in 2010, Geoff has helped produce a series of Nixon Legacy Forums, which are documentaries focusing on President Nixon’s various public policy initiatives. The forums are co-sponsored by the National Archives and the Richard Nixon Foundation.  They are usually broadcast on C-Span’s American History channel. Over three dozen such forums have been produced to date.

Geoff’s first book, The Secret Plot to Make Ted Kennedy President, was published by Penguin Sentinel in 2008 and focuses on the political intrigue behind the successful exploitation of the Watergate scandal by Kennedy administration loyalists. His second book, The Real Watergate Scandal, Collusion, Conspiracy and the Plot that Brought Nixon Down, was published by Regnery History in 2015. It focuses on judicial and prosecutorial abuses in the Watergate trials. Shepard also has a third book underway about the Pentagon Papers, the Church Committee and the Plumbers prosecution, as well as a separate book on the key White House tapes.

In the spring of 2019, Geoff taught a semester course at Temple University’s adult education program.  “Watergate Revisited, An Insider’s View” consisted of twelve 60 minute lectures, each followed by 30 minutes of Q&A.  Lectures from Weeks 10 and 11 have been re-broadcast on C-SPAN’s American History channel and are available for viewing on their website.  The entire twelve lecture series was videotaped and will be available for viewing in the near future.

Geoff and Saundra, his wife of forty-five years, live outside of Philadelphia. They have two adult sons.