In late May,1971 ,I staged a practical joke that almost got me fired. Let there be no doubt, Haldeman was looking for the perpetrator and was certainly going to fire him–he just didn’t know it was me he was looking for.

It all started innocently enough: We had a new staff secretary, Jon Huntsman, who was a little older than the rest of us, hadn’t worked anywhere in the government or the campaign before, and was perhaps overqualified for the position he was filling. In any event, his memos tended to be somewhat ostentatious.

One in particular was really offensive: Dated May 26th, 1971, it was addressed to the entire White House staff and consisted of but two sentences: 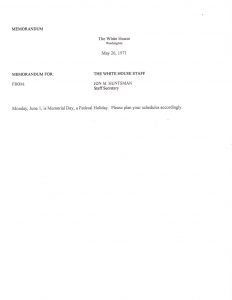 Now, all of us really did work hard and already knew quite well that we needed to hang around–even on Memorial Day weekend–if there were any possibility of trouble in our area of responsibility. Huntsman’s memo didn’t change this a bit-but it did confuse things, since it was so ambiguous: Was there some hidden meaning here we were missing? Was Haldeman, Jon’s immediate superior, ordering us actually to take a holiday?

In any event, two days later on May 28th, a further attempt at explanation was circulated again by Huntsman and again to the entire White House staff, but this time consisting of two paragraphs: 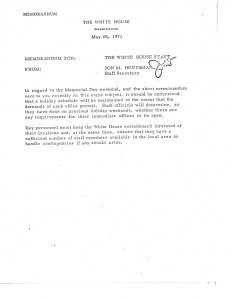 Now, this was a little more like it: No one was being encouraged to take the weekend off-it was the same drill as always and the only one who didn’t know it was that new guy, the officious one, Jon Huntsman. As fate would have it, I was at the office working on that particular Memorial Day and decided to play a practical joke on Jon.

I set about drafting a two page memo, in his name, to further clarify any misunderstandings from his previous two memos. My memo, the fake Huntsman Memo, is attached, as are copies of his two earlier memos. Even years later, I think it’s really clever: It divides federal holidays into two groups: Major Federal Holidays (MFH) which everyone else gets off, and Less Than Major Federal Holidays (LTMFH), which most people don’t get off. When I was very young, Lucky Strike cigarettes had a slogan: “Lucky Strike Means Fine Tobacco”, and you were encouraged seemingly endlessly-to remember “LSMFT”. Well, this was the remote origin of LTMFH.

The memo then goes on in the most obtuse and obscure bureaucratic manner to define with exquisite precision just what you were to do in determining whether or not you had to come to work: it depended upon “the anticipated probability of unexpected exigencies”–whatever the heck that was–and suggested each office should establish an appropriate commute radius depending upon its own unique circumstances. Finally, it said that any staff not explicitly scheduled to work at least four hours on that holiday would be contributed to a pool to service those that had. Well, heck, under this impossibly ambiguous standard, how could anyone plan to have off?

LTMFH, in contrast, were to be treated quite differently: “The standard expected to be in effect is that which would normally be in effect were there no LTMFH in effect.” If you felt you understood the standard for MFH, you might really ponder just what was intended by this, supposedly lesser, standard.

The memo then ends with the hope that it has clarified any lingering confusion–and that any questions would be welcomed by the staff secretary. 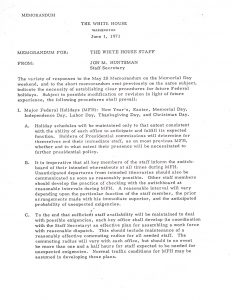 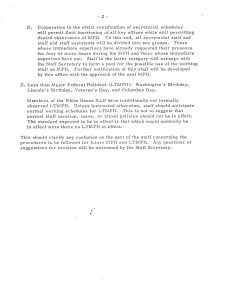 I fancied my memo quite amusing–and, using my WH pass, placed copies in the middle of the desks of about twenty-five members of the White House staff, such that they would see them immediately upon return from their Memorial Day weekend. I didn’t quite have the nerve to put one on Haldeman’s desk, since I was never near that office and my presence might arouse suspicion from the guards, but I did put one dead center of Huntsman’s completely clean desk in the office next door to Haldeman’s.

The following morning was not greeted by the laughter and titillation I had expected-not by a long shot: Huntsman had seen his copy and taken it directly to Haldeman, who hit the ceiling. Two problems came to mind: (i) Who the heck had the time to waste on this stuff–which made fun of his own staff; and (ii) What would happen to their reputation if this leaked and people thought it was for real? The White House, his White House, would become a laughing stock.

Haldeman ordered the culprit be found and fired immediately. No one seemed to have any idea who might have done this dastardly deed, so the Secret Service was summoned and ordered to test all the typewriters in the West Wing and the EOB to find the memo’s author. The next day, the Secret Service worked up the nerve to tell Haldeman-perhaps indirectly-that there appeared to be no threat to the President involved and they thought they were without jurisdiction to complete their tests. Undeterred, Haldeman’s office called on Jack Caulfield, the private detective they had dispatched previously to learn more about Ted Kennedy’s Chappaquiddick tragedy and who would later figure in the Watergate scandals.

Caulfield was working his way down the EOB hallway, when I decided I should confess all to my immediate supervisor, Bud Krogh, and seek his protection. After all, everyone in that vicinity had thought the memo to be quite funny-but that was before we learned of Haldeman’s displeasure. I suggested to Krogh that I might go directly to Ehrlichman’s office, confess and beg for mercy. Bud responded, laughingly, “Even Ehrlichman couldn’t save you now.” I was so distraught that I actually fled the building for the remainder of the afternoon.

Fortunately, help came from an unexpected source: One of the other associate directors from Ehrlichman’s original office of counsel to the President, Ed Morgan, was a known prankster and obviously a suspect in this situation, too. Morgan’s office was next to Krogh’s and just up from mine. He told Caulfield, when interviewed, that (i) He didn’t do it, but (ii) He knew who did, and (iii) He thought it had been a harmless prank, so he wasn’t going to rat the author out. (In fact, Morgan did know it was me, since Krogh had told him.) The powers that be concluded that Morgan really had authored the memo, but was too senior to fire over this-so they ceased the investigation, and I was spared. (Of course, I was most pleased to let Morgan get all the credit for the memo at this point, too.)

Nothing further was heard about the memo; but at least it hadn’t leaked. Perhaps Haldeman was not all that far off in his fear of it being taken seriously: Diane Sawyer, who worked in the press office at the time, told me that shortly before the Fourth of July Holiday, she was contacted by Peter Flannigan’s top assistant. He had been assigned the responsibility of being sure Flannigan’s office was in full compliance with Huntsman’s memo-and he was calling Diane for advice, since he just couldn’t seem to figure out how it was supposed to work. Diane told him she thought it was all a joke-and when she told me about the incident, we laughed ’till we cried over the image of this poor guy struggling over how to comply with “my” memo.

Two other things of note, however: Jon Huntsman went on to found what became the largest privately held chemical company in the world: Huntsman Energy. He was also extraordinarily generous with his time and his financial contributions to any number of charities, particularly for cancer research and to his alma mater, the Wharton School at the University of Pennsylvania. Ed Morgan suffered a far different fate: He was the unfortunate lawyer who back-dated President Nixon’s deed of gift of his Vice-Presidential papers for tax purposes, was caught, confessed, served time and was disbarred. The poor man never recovered from this incident and drifted aimlessly in and out of alcoholic stupors until he finally passed away years ago.