When Nixon won the 1968 election, I decided I wanted to go to Washington to work in his administration. I didn’t know anyone close to him, nor had I been active in his campaign, but learned from a brochure in the law school’s Placement Office about the White House Fellowship program and completed an application.

The rules were simply: Applicants were to be American citizens, between ages 24 and 35, who showed demonstrated leadership potential. I ended up being chosen, at age 24, as one of the very youngest ever selected for this prestigious award. Of course, it probably helped that I had graduated from Nixon’s alma mater and even had a personal scholarship from him.

Below are photos of the East Room award ceremony on June 16, 1969, with President Nixon and Commission Chairman Arthur Flemming in the center and me on the far left. The President spoke highly of our cohort, saying, “I note that such great prestigious universities at Harvard, Columbia–and Whittier–are in the group.”

Two shots of my personal meeting with the President for an Oval Office photo op in 1970, with the Fellows’ Executive Director, Hudson Drake. In the first, I’m shaking the President’s hand, with Hudson beaming in the background. In the second, I must have said something surprising, given the looks on their faces. 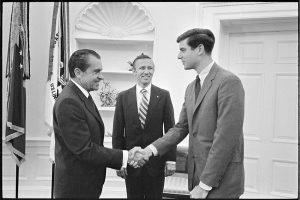 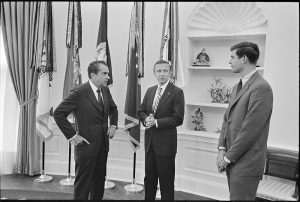 Except for choosing among the thirty finalists, the entire selection process had been handled by Lyndon Johnson appointees. The result was a class that would have been right at home in a Hubert Humphrey administration, but clashed with Nixon’s. He never met with our class during our Fellowship year. I was the only one to receive a personal audience with the President and the only member to be hired into a fulltime position on his White House staff at the conclusion of our Fellowship year.